What I do in the D

We did a Blight Busters gig at a house and while there I came across a mess for their electric.
A 220V line that was active in the panel ended, somewhere, but it was unknown where or what the condition it was in at the other end.

The people are fighting the good fight, but, the economics wasn't in their favor.

While I could have charged more for doing this I couldn't let them live in an unsafe house.  Having had a fire wipe out what I had had, and having a chance to help them keep from having that feeling I did what needed to be done.

To code and safe.  This is the fourth job on electric in the area...

Next up for this house is insulation to help them save what money they do earn over giving it to which ever company is supplying their natural gas and electric.

Blow in insulation to the attic and faced fiberglass insulation along the perimeter of the foundation to keep the cold air out.  Their return on investment will be about 1 year, between labor and materials, not 3 or more years if someone else does it.

The below is a bit more of a mess than I really found it.  I had already started pulling the wires from the panel before I thought to snap a pic.  Note the 100 amp wire than usually runs from the meter to the panel.  This is their stove wire, initially backed by a 50 amp fuse.  This made the residential stove the weakest point in the circuit, so if their stove had an issue it had a lot of juice to draw before the fuse popped.  It just seems wrong for a stove to keep getting juice if a short happens in it. 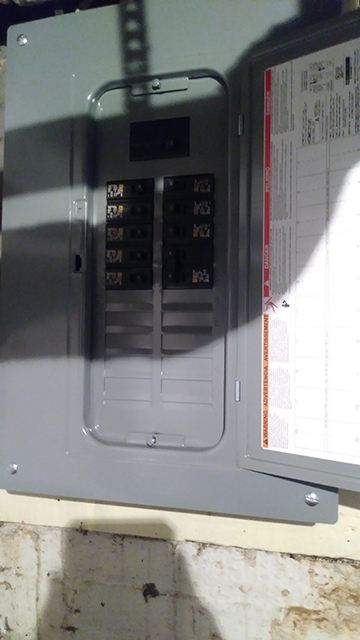